Jennifer Smith Grubb, President of Sustainable Silicon Valley, told a Sydney audience drawn from the corporate & industry sectors, local, state and federal governments and a farmer from Queensland, an inspiring story of how a coalition of Californian companies, governments and non-profit organisations applied the world’s first regional approach to EMS to reduce their impact on climate change.

Sustainable Silicon Valley (SSV) is a coalition of Californian companies, governments and non-profit organisations who applied the world’s first regional approach to EMS to reduce their impact on climate change. This collaborative approach came in response to the California energy crisis of 2000/2001, which affected industry, government, communities and families across the State.

Due to industry deregulation, energy companies had been increasing energy prices, while at the same time their ability to supply energy required was declining. The result was a significant hike in the price of electricity in May 2000 followed by a year of large-scale black outs across the state. By January 2001 a state of emergency had been declared, power companies were going bankrupt and workers were unable to continue their activities due to lack of power supplies, with resultant unemployment.

In the midst of the chaos, a group of leaders from the corporate and business sector, non-governmental organisations, academia and the California Environmental Protection Agency, met to discuss what they could do to reduce the likelihood of a similar crisis occurring in the future. In addition, the participants were seeking improved ways of managing the environmental impacts of their routine business operations.

The vision was to create a Silicon Valley with a healthy environment, vibrant economy and socially engaged community through the achievement of environmental sustainability.

Their intial goal was to make their companies and communities more sustainable through a reduction in their energy use. The tool they choose to use was an Environmental Management System (EMS). The California Environment Protection Agency began a project in 2001 in collaboration with the Silicon Valley Manufacturing Group (now the Leadership Group) and the Silicon Valley Environmental Partnership. Keith Smith from Cal EPA commenced initial project works gaining regional support and discussing regionally relevant targets and issues of concern.

In 2002 the Sustainable Silicon Valley group completed the first step of an EMS; assessing and prioritizing its environmental impact and setting goals. They identified 35 key environmental pressures across the region, the top six being:

Of the six highest priority environmental pressures, SSV's first focus was to reduce use of non-renewable energy sources, measured through a reduction in CO2 emissions. CO2 is the largest contributor to human-generated greenhouse gases. SSV chose CO2 emissions as a benchmark as it encompasses both energy use and its environmental consequences in a single measure.

With a change in the political landscape and a reduction in the financial contributions from California EPA, SSV established a not-for-profit organization with Jennifer as the full-time President and recruiting support from a wider group of participants from the entire Silicon Valley region, including Santa Clara and San Mateo, Northern Santa Cruz and Southern Alameda counties.

In April 2003, SSV announced that its first focus would be to reduce CO2 emissions in the Silicon Valley to 20% below their 1990 levels by the year 2010. The SSV goal compares to the Kyoto Protocol's goal of a 5% reduction over the same period, and to Governor Schwarzenegger's call for California to reduce emissions to 1990 levels by 2020 and to 80% below 1990 levels by 2050.

In March 2004 the first group of 19 organisations and companies (SSV Partners) officially pledged to join SSV in its efforts to work toward reaching this ambitious goal. More companies signed on and by 2006 there were 56 SSV partners committed to this goal.

Results of the SSV project

Between 2000 and 2005 there was a 12% overall reduction in CO2 emissions by SSV partners. This compared to a 2% reduction by Silicon Valley overall. The graph below shows the sum of the changes in SSW Partner Emissions. 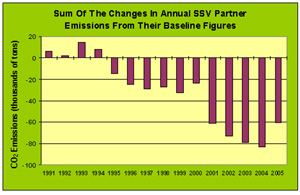 Reducing CO2 emissions had some serious economic outcomes for the SSVpartners.

In March 2004 the first group of 19 SSV Partners officially pledged to join SSV in its efforts to work toward reaching this ambitious goal.

By September 2006 there were 43 partners reporting data on 72 facilities.

SSV partners are now working with their customers, suppliers and others to ‘spread the word’. Pacific Gas and Energy Company encourages energy efficiency programs through rebates and incentives, energy analyses and demand response programs. Some companies now offer 100% renewable energy resources to customers, allowing them to participate indirectly to energy and CO2 outcomes for the region. Various tools that allow individuals to calculate and take steps to estimate their CO2 emissions have been developed, including the online Cool It! Program. Using the EMS process on a regional basis allows stakeholders to become involved in identifying and addressing targets, and also to develop reporting and monitoring programs that are relevant to them.

The SSV website describes the project as being designed to move beyond the traditional command-and-control model of environmental regulation to one of collaboration and partnership. “By focusing on the desired outcome, rather than compliance-driven standards, participants can choose the methods to reach that outcome that makes the most sense financially and technologically for each of them. Environmental benefits come from these outcomes, not the means used to achieve them”.